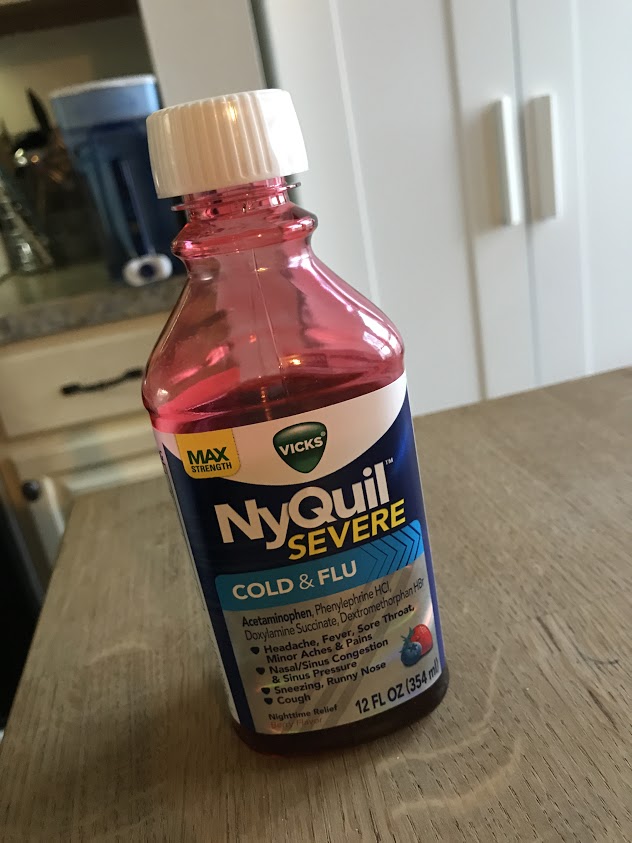 Note: I am documenting my plan to get up at 5(ish) every weekday during February.

Yesterday was an office day for me. After the 90-minute drive home, I trudged in the door and did a shot. As I did, I thought to myself what my dad always used to say: “It’s 5 o’clock somewhere.” Actually, he used to say “It’s noon somewhere,” but he sounds less drunk and my reverie makes a little more sense if we go with 5.

Unfortunately, the shot was of NyQuil. Then, at 4:54 PM, I went to bed and stayed there until 6:10 this morning. Being passed out during the entire State of the Union was not planned, but it was a happy coincidence. Who’s winning now? This girl.

So I did not get up at 5, but I went to bed at 5. And now I’m writing this at 2:26 PM when I should be working. I intended to work today but my brain is not having it. I also intended to stay awake all day, but I just took a nap. But hey … I showered, meditated, tried to exercise but bailed after I realized I couldn’t breathe out my nose, did some laundry, and cleaned up the kitchen. So those are things and I did them.

I told Joe we’re going out for dinner. He was sick, too, but he’s a day ahead of me on this and he’s starting to feel better. He’s perfectly capable of cooking and would gladly do so, but I don’t feel like even dealing with figuring out whose turn it is to set the table … I just want to sit still and have the food magically appear. (We will Purell like crazy throughout dinner, I promise.)

Here’s the total shit part of all this: We are supposed to go away to celebrate our one-year anniversary this weekend. It’s not a big, elaborate trip. We’re just going into the city and staying at a nice hotel and not putting anything on the schedule except hanging out with each other at a place that is not our house. Eating, drinking, schtupping. That’s the entire plan. But it would be dumb to go if I still feel like this. And we won’t be able to reschedule for more than a month. So I’m hoping I really am 24 hours behind Joe and I’ll start to feel better tomorrow.

In the meantime? I have so much work to do. I’m not an employee, I’m a full-time contractor. I don’t have sick days or vacation days. This is, by far, one of the biggest downsides of being self-employed. I wasn’t planning on losing a couple days worth of worktime this week … so … I need to get this brain of mine into gear.

All for now, friends. Chat tomorrow.