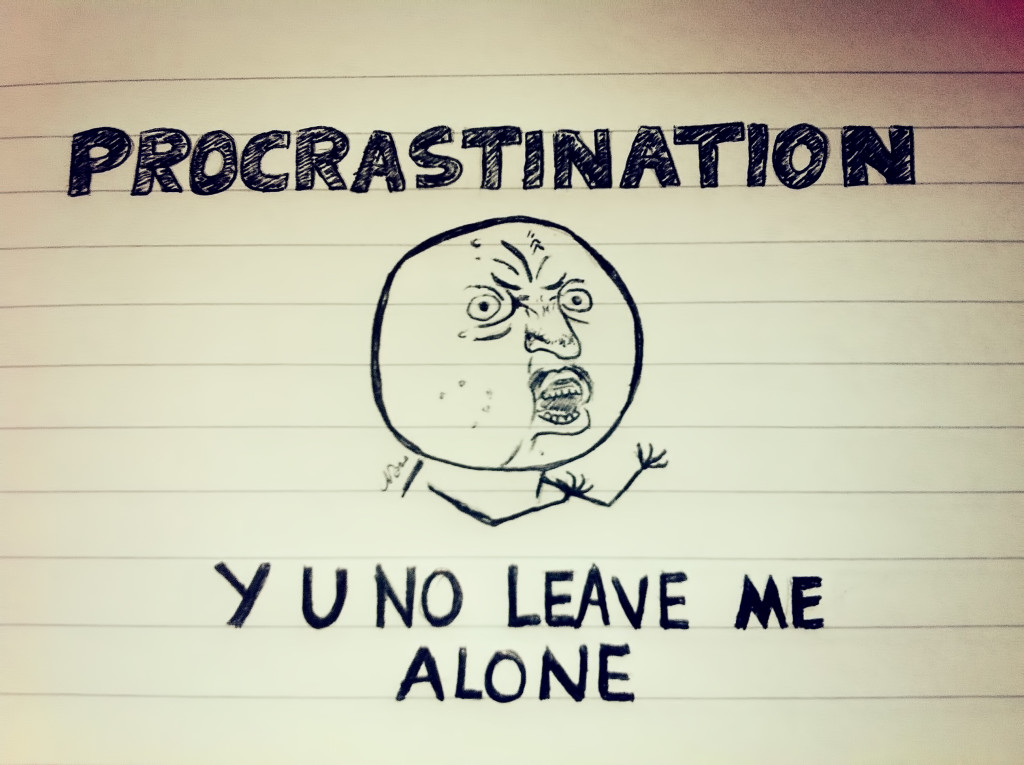 Note: During the month of March, I’ll be writing about procrastination and ADD. This piece was originally posted here on March 22, 2016 (almost exactly three years ago). I’m rerunning it again as part of this series, with only minor edits.

We all have that bottle of toilet-tank vodka, don’t we?

You know what I mean … they say that alcoholics often hide their drinking because they’re ashamed of it. And according to every made-for-TV movie that ever featured someone with a drinking problem, the toilet tank is a prime hidey hole for hard liquor. That is, at least until someone needs to repair the toilet. Then, uh oh! Turns out Mrs. Garrett really was self medicating all those years …

So maybe we’re not all stashing a bottle of Rumpel Minz in the crapper, but I do believe that most of us have a thing—a behavior, a thought, a compulsion—that we’re not particularly proud of. Often, it’s because we feel powerless against this thing and we don’t know how to stop it. We think that if other people knew this thing about us, we would be revealed for the pathetic losers that we suspect, deep down, we really might be.

Shame is my copilot

You want to know my most shameful secret? Of course you do. Who could refuse an offer like that? I want to know yours and I probably don’t even know you.

Now, I’ve just said, er, written that very casually like it’s no big deal. But it’s actually a huge deal. Until recently, this has been the thing about myself that I have guarded most closely. It’s the thing that I always suspected that if people knew about me, they would no longer love me.

I imagine that some of you might be thinking “So what? Everyone procrastinates. Why is your procrastination so special?”

Even though I’ve committed to writing this, I still hesitate to explain just how bad this is. Because I’ve hidden it so well, you might not be able to tell the extent of this problem by looking at my life.

I think I’m good at what I do. I get repeat and long-term clients.

I pay my bills.

My house is not a disaster.

I look like I’m able to function as a real-world adult.

But under the surface, I live in the perpetual mindset of the college student who has had all semester to do the term paper, but only starts it hours before it’s due. That means that it probably doesn’t matter how much time I have for any assignment … I will torture myself about it for 98% of that time and then pull a miracle out of my hoohah at the last minute.

And if it’s something that has no due date—like, say, a creative project that I want to do just because I want to do it—it will probably never get done.

I will intend it to get done. Every day I will wake up thinking about working on it. I may even spend hours trying to get myself into the proper state of mind in order to begin working on it … but will I actually ever sit down and BEGIN?

This makes me feel powerless and useless and like a big losery loser.

And then there’s shame. Shame about my inability to get the shit done. If I’m a smart person (and I think I am) and I know better (and I definitely do), then why have I been unable to fix this?

Shame and I spend a lot of time together.

Am I in a tribe of one? No. That’s never true

I’ve spent the past year and half trying to figure out WHY I function this way. Do I have ADD or ADHD? Is this a spiritual/creative issue? Am I just spectacularly unorganized? Am I afraid of success? Is it a self esteem issue that is manifesting as self sabotage? Is it a writer thing? Am I just a lazy idiot?

All excellent questions. And all questions that I have considered.

I know that I’m not the only one who struggles with this, even though I feel like I am. So therefore, I’m comin’ out with it. If blogging all of these years has taught me anything at all, it’s that just being out there with who I really am has a lot of power behind it.

Why is that? Maybe it’s because it takes so damn much energy to push stuff down. It’s like trying to push a pool float to the bottom of a pool so you can stand on it. You might be able to keep it down for a while, but eventually it’s going to knock you off kilter and down you will go.

Over the next few posts, I want to share some of the things I’ve tried to use to try to cure this affliction of mine, including pharmaceuticals, meditation, exercise, holistic elixirs, having an accountability partner, lists, schedules, affirmations, using productivity apps … and on and on.

So who wants to go on this little journey with me? And who wants to take bets on whether or not I will actually finish this series? ‘Scuze me a moment, will you … ?

Hi God. So listen … you know how much I appreciate ridiculousness. And certainly, you know that I particularly enjoy it when the joke is on me. But it would be waaaaay too predictable for me to announce that I’m doing this and then not finish, right? I mean, that’s not even a joke that would make it into a bad sitcom. OK, it probably would because most sitcoms are horrible these days. (Oh, how I miss 30 Rock!) But anyway, my point is this: HELP ME COMPLETE THIS ASSIGNMENT THAT I HAVE JUST GIVEN MYSELF. Work with me so we can push this bitch over the finish line. You with me? Rock on, big guy.

Coming up in the next post: Do I have Adult ADHD?